I recently joined the Baronistas LinkedIn group, a place for online discussions between ex-Reuters and ex-Thomson Reuters people working in communications for non-profits such as international organizations and NGOs. I reckon it might be useful as a source of ideas and interactions.

It needs a logo so I’m parking a couple of images here, rather than on LinkedIn, as I don’t seem to be able to upload them directly there.

This one came from here: 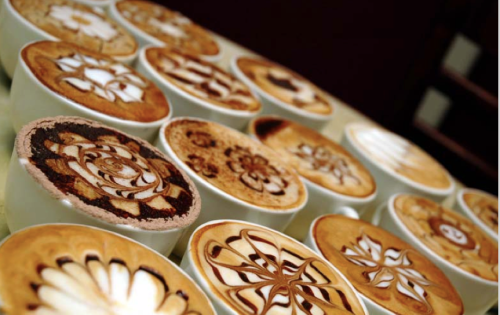 The idea would be to put the Thomson Reuters into a barista “weetjes” or whatever you call those little milk fluff things. Maybe half “weetjes” and half logo.

Filed under other stuff

News to make the rich richer

I wrote this comment in response to the following article by the World Association of Newspapers and Newspaper Publishers.

Thomson Reuters can hire all the new journalists it wants but won’t change anything fundamental about its daily news file. Sorry about that.

The agency deserves its reputation as providing a service that helps rich people get richer – that’s exactly what it does. Whatever its editorial cheerleaders might say about speed, accuracy and freedom from bias, they can’t escape the reality that the vast bulk of their clients, by value, work in finance.

The rarely spoken truth about journalism is that the news you get from any media outlet turns on a handful of factors.

They include income sources (banks/finance for Reuters), ownership (Reuters is controlled by a few very rich individuals), reporters’ choice of news sources (overwhelmingly traders, banks, economists, governments and other institutions), editorial ideology (profoundly one of dergulated banks, markets, trade, status-quo institutions and free-market capitalism) and, finally, the organisation’s response to real or feared “flak” or hostile elite criticism of its output (generally supine).

Despite serial financial crises around the world, various environmental ones looming, growing inequality across many countries and plummeting faith in conventional politics and politicians we get what from Reuters in response? Nothing sustained, nothing coherent and nothing journalistically credible – despite its mammoth editorial operation.

The only comfort for Reuters is that it’s in good company with all the other major globe-spanning and national news organisations you might care to name. None serves ordinary people’s interests or highlights the farce that representative democracy has become in the face of modern markets, finance and corporations.

It took me 11 years as a Reuters reporter (1994-2005) to realise the lock down on editorial thinking created by these different factors combined together. I was lucky to be able to grab a voluntary redundancy cheque and get out in search of alternatives.

So what did I find? The good news is that there are alternatives, the bad that they take time to build. They include doing journalism focused on governance and accountability to citizens as its core role, illustrating the global and national from local perspectives. It means training others to do the same and to share the content for free to help improve our political and media literacy.

In essence, it’s the sort of thing I dreamed Reuters could do before I got tired of banging my head against the wall trying to persuade my editors that that was what “freedom from bias” really meant.

I get into the whys and hows in far greater detail in my book Fraudcast News – How Bad Journalism Supports Our Bogus Democracies. It’s free to download as a PDF via the link or to buy as an eBook or paperback.

And no, I’m not expecting a Pulitzer.